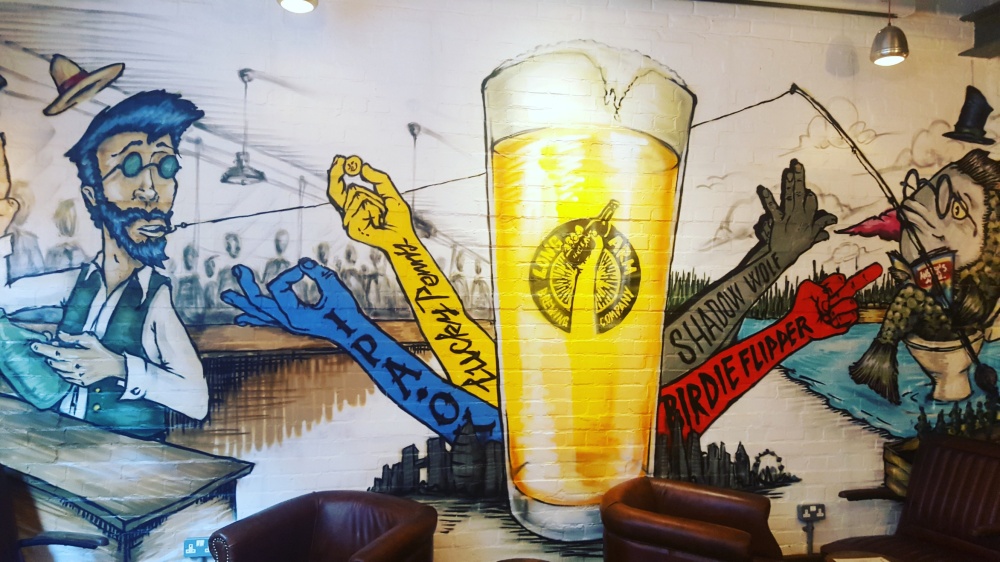 Following a delightfully boozy dinner party with friends on Friday night, Mrs. Flavour and I awoke with more than a hint of a hangover each. Fortunately, there’s a hot new venue just down the road and I can’t think of a better pick me up than several pints of tank fresh beer and a dirty great burger.

The Long Arm Pub and Brewery on Worship street has got it nailed! We entered this snazzy saloon-like bar and swaggered past the reclaimed wooden tables like thirsty outlaws. Our eyes were drawn to the massive shiny beer tanks that dominate the far-right corner of the space. Long Arm pride themselves on having a zero-carbon footprint, as the beer is brewed and drunk on the same spot. I for one couldn’t wait to sample that freshness and the charming bar staff were very obliging. We were offered some tasters of their intriguingly titled brews. The zesty Lucky Penny had a refreshingly light and fruity taste, an instant favourite with the Mrs. I however consider any beer with less than 5% alcohol content to be as welcome as an Ed Sheeran cameo. As delicious as Lucky Penny was, I needed something manlier that’ll put hairs on your chest (Mrs. Flavour’s note: – Why are you writing like it’s the 1970’s?). 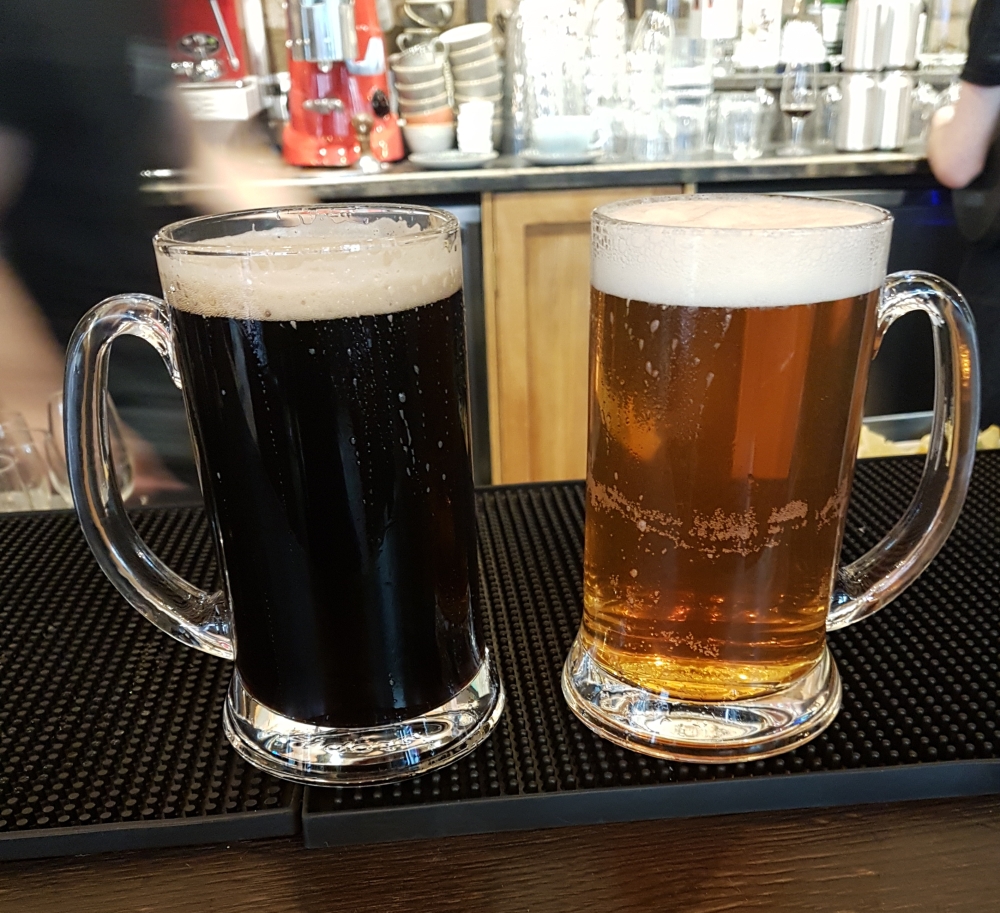 The bartender directed me to an intriguing black lager with a malty tang. I then sampled a bold dark beer flavoured with cookies and chocolate, which was every bit as delicious as it sounds. Plus, the 6% of alcohol was a winner in my book. We took our tankards of fresh brew towards the pool table, for a couple of frames and a peek at the menu.

Mrs Flavour and I are big fans of a pub game and the lure of the red baized American size pool table was too much to resist. I racked them up as my good lady ordered up a couple of small plates to fuel the competition. I think the highlight of my weekend was the point at which the braised short rib croquette landed on my palette. This hot, crispy coated morsel of deliciousness is crammed with the softest, juiciest strands of prime beef. I was so overwhelmed by its meaty majesty that I completely miscued my next shot (Mrs Flavour’s note: – Nothing to do with that beer then?). The crispy squid rings were worth sitting back down for and the comforting richness of the mac and cheese croquettes were more than enough to console the fact that I was clearly losing the game at this point. Time for more beer! 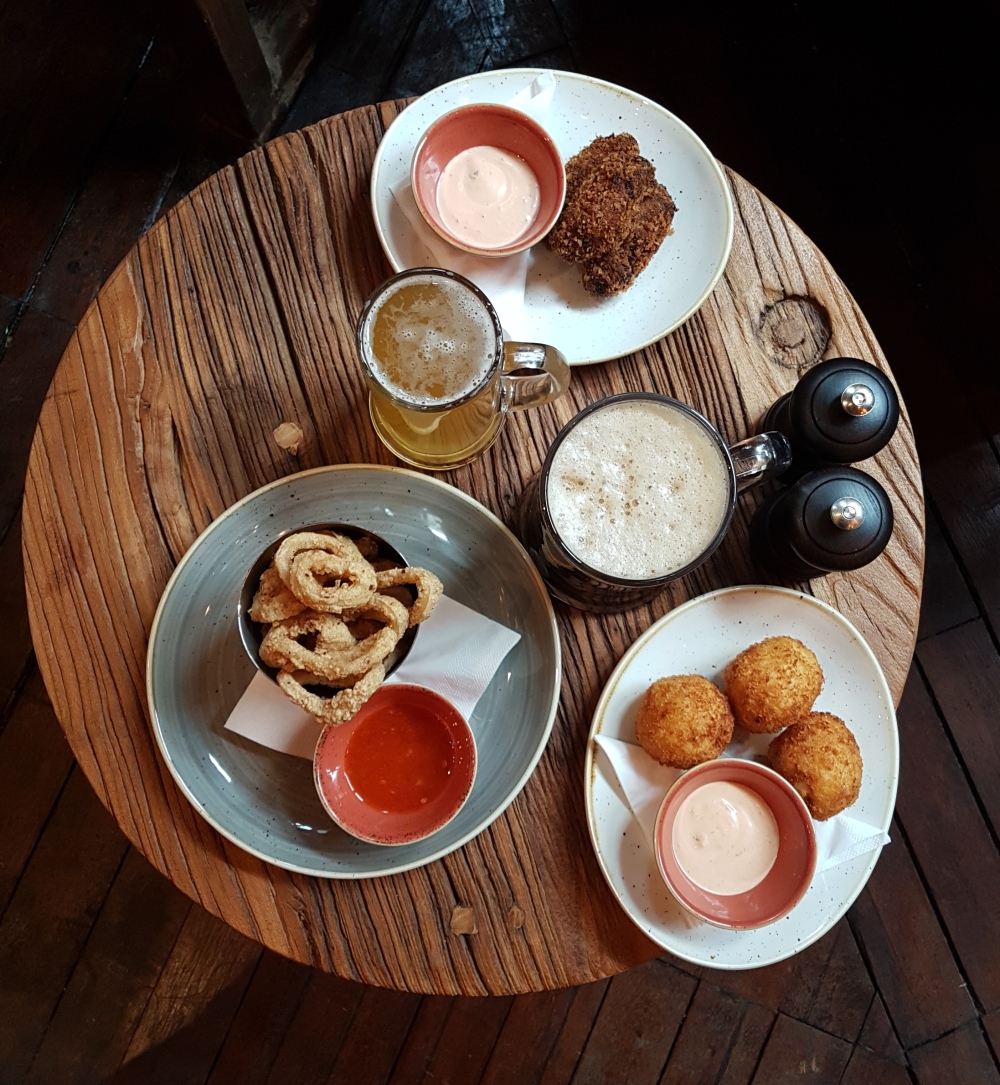 In keeping with my fondness for darker brews, I opt for a pint of Shadow Wolf smoked stout. The smokiness is certainly evident in the finish and it hints at chocolate whilst creamily washing across the taste buds. I brought back a cool glass of the American style IPA OK for my better half, which she happily swigged to toast her imminent pool table victory. I decided to distract her by bringing out the big guns: The burger menu!

The Long Arm pub has a pleasingly varied selection of 5 burgers and one dog, catering for vegetarians, pescatarians and greedy buggers like me who crave tons of meat. Unsurprisingly, Mrs Flavour opted for the suitably titled Dirty Bird (Mrs. Flavour’s note: – You’re this close to getting a slap). Her crunchy coated chicken burger came with an IPA OK Honey mustard sauce, which certainly stacked it above anything the Colonel churns out. I selected the cheekily named Build That Wall Burger, a meaty covfefe of juicy beef patty and chipotle jalapeno and red bean chilli which was fit for a President. If the burgers in Mexico taste this good, I know which side of the wall I’d like to be on. A few more beers and a side of crisp onion rings meant I really didn’t care that my wife was clearly whuppin’ my ass on the pool table. 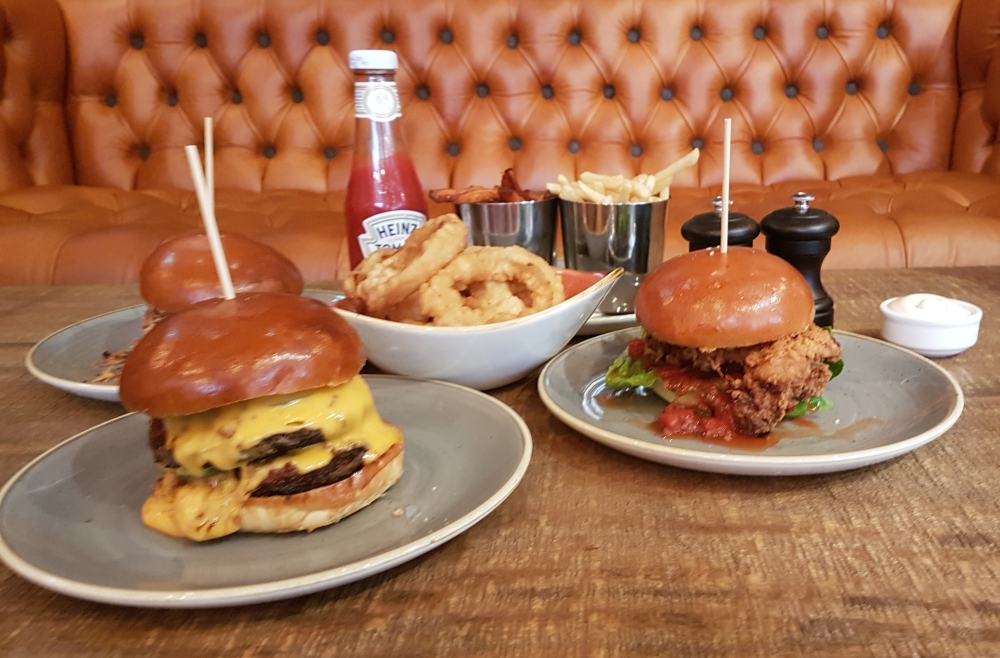 As we nestled into the comfy leather furniture and sipped some of the finest craft beers we’d tasted in a while, our hangovers became but a distant memory. The welcoming atmosphere and mouth-watering food at Long Arm filled us with a new lease of life and we were once again craving the excitement of a warm London evening. As luck would have it, I sauntered through the doors to the Long Arm bathrooms and was somehow magically transported to the ground floor of the Montcalm Royal London House. These two awesome spots were adjoined all along! The hotel lobby was familiar to me because it’s the gateway to the magnificent Aviary rooftop bar and restaurant, a recent favourite of me and Mrs Flavour’s. I promptly returned to whisk my lovely off for a few Negroni’s enjoyed at the best place to watch the sun set over the City. I’d love to tell you more about that but it became a bit hazy after the third cocktail (Mrs. Flavour’s note: – Never fear, I’ve a much better memory and will be telling our dear readers all about the Aviary very soon). We can’t wait to return to Long Arm Pub and Brewery to start crafting more delicious memories.