They say the hair of the dog is the best cure for a hangover. Well, last Sunday we opted for the full glossy coat, tail and at least two of the legs. Feeling a little jaded from the night before, we slipped past the velvet rope, down the red carpeted stairs and into the glitzy beating heart of Piano Works ready for a brunch like no other. Bottomless prosecco, 2 courses of comfort food and show tunes sung live by the cast of Book of Mormon. What a way to blow away the cobwebs. 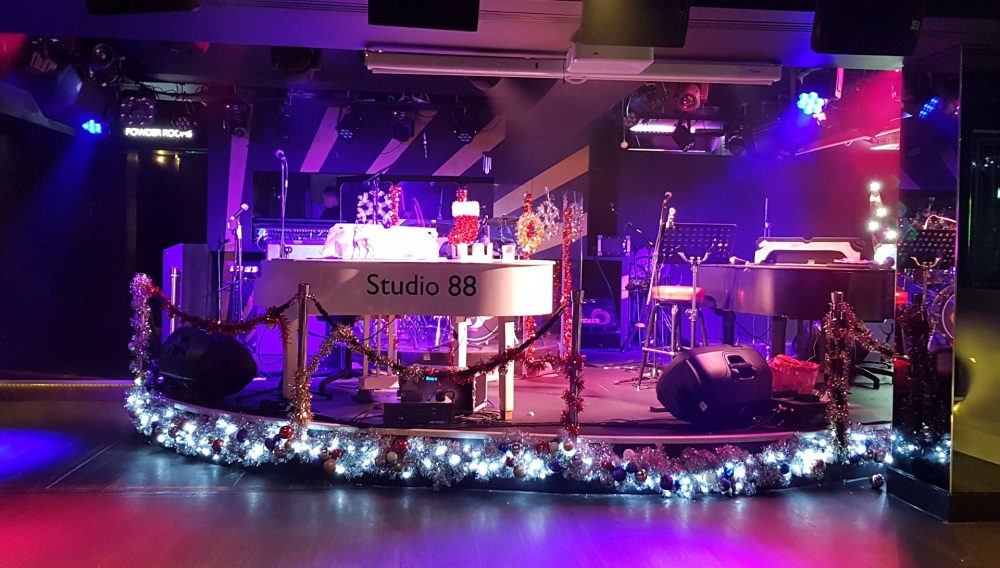 We were given a front row seat near two rather grand pianos. Menus were delivered and we each had a glass of fizz before we’d even taken our coats off. Just the type of service we needed. We sipped our way back to equilibrium as the statuesque curves of Topsie Redfern graced through the dry ice mist. Our glamorous hostess arrived on stage and promptly grabbed Mr Flavour to be her announcer. Ever the showman (even with a massive hangover and barely half a glass in him), he serenaded the audience and the show began.

Topsie was a fabulous hostess. Hilariously funny and gifted with a powerful, versatile singing voice meant for Broadway. Her saucy drag act had the audience in stitches! As for the other acts, wow! Two of the male leads and a female lead from The Book of Mormon stunned us with their exceptional talents. Each delivering rousing song performances from their show, along with other well-known West End tunes. Backed by a talented pianist, they shone like stars and as the bottomless drinks flowed, the audience became ever more participatory.

A little clip of singing at its best:

The food was perfect for our needs. A selection of comforting breakfast favourites and some cheeky desserts as a sugar fix. We savoured a tasty eggs Benedict, eggs Florentine, with a key lime pie and an indulgent banana split for afters. Piano Works offer a few weekend brunch options. Guests can order from the brunch menu and enjoy two fun filled hours of bottomless prosecco, bloody Marys, mocktails or soft drinks. We were having far too good a time to leave after our 2-hour slot, so we ordered another bottle of fizz and caught the rest of the riotously good show.

We’d struggle to remember the last time we had such a blast on a hung-over Sunday afternoon. Piano Works delivered a much-needed mixture of laughs, entertainment, tasty food and flowing drinks. We left in a mood to keep the party going, which we did, until the cold reality of Monday morning dawned upon us. We’ll be back to party at Piano Works. Just maybe on a Saturday next time.